So there’s this saying about books that we’ve all heard that says we’re not to judge it by its cover. Yes, I get that its not meant to be taken literally, as in we’re not really talking about books when we spout that overused statement. But because I’m actually reviewing a book and finding myself unusually unsure about where to start, I’ll start with that. We don’t judge a book by its cover; we judge a book based on how much it makes us think and how it makes us feel. 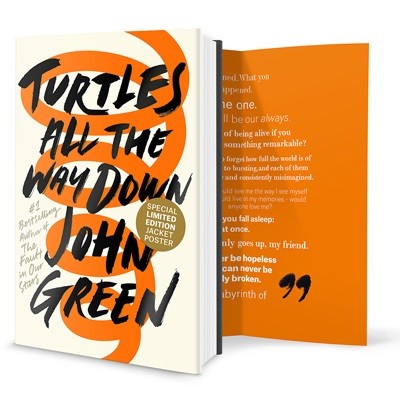 John Green’s latest offering has me baffled, to be honest. On one hand, there are bits about it that I really really like and which I’ll get to later. On the other hand, a part of me found it really difficult to get through the book especially towards the end when things start to spiral out of control for our main character.

Aza Holmes is a teenager who is trying, really trying, to co-exist with the thoughts that live in her head. She tries to lead a normal life with her fearless best friend Daisy and even finds the time to dabble in a little mystery: the mystery of where billionaire Russell Pickett has hidden himself to avoid getting arrested for corruption. She also makes a connection with said billionaire’s son, Davis, whom she met at “sad camp” years ago and this connection slowly leads to – what else – the sweet sweet bloom of first love.

First of all, I think John Green did a really good job of not just describing what mental illness feels like but really getting the readers as close to the real experience as one can get while reading a fictional novel. The scenes where Aza becomes a helpless victim to her thoughts, to the point where she can’t even kiss a guy she likes without freaking out, were really painful for me to read. In that moment, I was as fully invested as Aza to the outcome of that situation and that speaks to John Green’s talent as an author.

I mentioned that I found it difficult to get through the book. I think what I meant to say is that it hit a little too close to home. Aza gets anxious about her health, specifically about getting an infection. I’ve already admitted in a previous post that I’ve always been a little bit of a hypochondriac. At one point in my life, I was so convinced that I had brain tumour because I found a lump at the back of my head. I remember crying in the dark in my room, crying in church and thinking about all the things that I will never get to do because I was going to die of brain tumour. I think I must have been about 12 or 13.

After a week, I managed to rid myself of these irrational thoughts and correctly concluded that I did not have brain tumour. Studying Nursing made my anxiety about my health both better and worse. Better because I can usually reason myself out of my worries by reciting the signs and symptoms of my imagined illness – signs and symptoms that I didn’t have – and worse because whenever I do have symptoms, my brain goes to the worst possible scenario there is.

I can usually laugh it off and make a joke about it. But reading this book makes me realise that its not a laughing matter when these thoughts start to take over your life; when you can’t even kiss a guy without worrying that his microbes will forever be a part of you; when you actually ingest a dangerous substance just to make yourself clean; and when you find yourself pleading for someone to just take you out of yourself so that you can stop having these thoughts. Yes, in some respects this book is really really dark.

The moments of levity come from Aza’s friendship with Daisy and of course, the romantic connection with David. I think that the friendship between the two girls is one of the strongest points of the novel. In fact, the novel can be mostly summed up by this line that Daisy tells Aza:

You know I love you right? My whole life I thought I was the star of an overly earnest romance movie, and it turns out I was in a goddamned buddy comedy all along.

The friendship takes a little bit of a back burner to the romance but I’m glad that it was made clear towards the end that it was one of the constants that helps Aza get through life.

And what about the romance you ask? Come on, this is John Green. You can bet your ass that there will be instagrammable and quotable quotes that the more emo half of the population will just devour. There is also the ever-present, ever-so-deep (and slightly pretentious) existential conversations that makes me ask whether teenagers really talk that way these days.

However, I think John Green made the right call by not making this seem like another book where love cures all but rather, the romance almost seems like a bittersweet postscript, a small but significant ode to the magic of first love:

You remember your first love because they show you, prove to you, that you can love and be loved, that nothing in this world is deserved except for love, that love is both how you become a person, and why.

If I could make a small criticism, I thought that bit with the mysterious disappearance of the billionaire was not only irrelevant and useless, it was also weird. Honestly, it did not add to the story except as a plot device for the MCs to re-connect with each other again. And also, who leaves all their money when they die to their pet lizard? It was just ridiculous and the reason why I only gave this book 3-stars on Goodreads. Apart from that, really good book for both fans of the YA genre and just readers in general.

4 thoughts on “Book Review – Turtles All The Way Down”