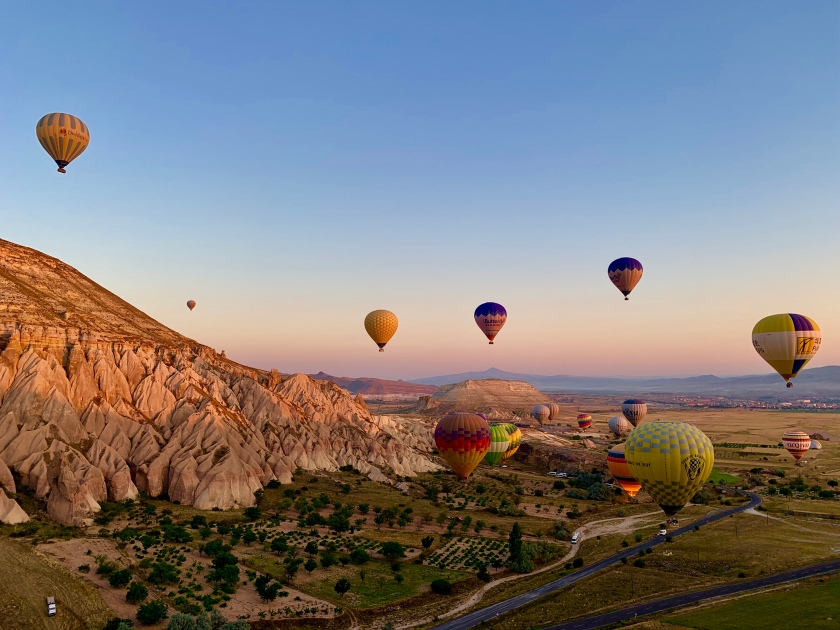 I don’t often stop to think about how fortunate I am to be able to travel the world, to see all the places that I only used to read about in books, and to experience things that are on most people’s bucket list. I take for granted that I live in a city that in its own right is also a sought-after travel destination, as well as a place that allows me easy access to Europe and the rest of the world.

I admit to sometimes getting carried away by the social media hype, and sometimes I have to consciously remind myself that it doesn’t matter if you don’t get the perfect instagram shot, that what matters is immersing yourself in the moment and appreciating the opportunities that come your way.

I woke up at the unholy hour of 2 in the morning for our Capadoccia Hot Air Balloon excursion. The Turkish heat must have driven me temporarily insane because I became obsessed with the idea of taking the perfect photo, so I changed my outfit three times and spent at least half an hour curling my hair.

Our pick-up time was at 03:45 am and by 4:30 we arrived at a building where we were then sorted into groups. I was very excited to see that there were only four of us in our group and I thought, great, less photo-bombers. We then drove another half hour to Red Valley where the tour company was already setting up our balloon.

At this point it was nearing sunrise and I was getting quite frustrated. I’ve seen many photos of hot air balloons in Capadoccia and I knew the timing had to be right. It wouldn’t do to see it when the sun has risen completely. The whole experience is at its most dramatic during that glorious magical moment when the sun is just about to come up and the colours of the balloons are set against some of the most stunning backdrops you will ever see in your lifetime.

Needless to say I was nearly cursing as full daylight started to set in and everyone else’s balloon was up in the air except for ours. I didn’t want to hassle anyone because I certainly didn’t want them to take shortcuts and compromise our safety. I was not planning on falling off any hot-air balloons that day, that’s for sure. But I was becoming increasingly impatient and irritated from the wait, and I was even more annoyed when I saw a van full of people and was then told they were actually joining us in our basket.

I was also disappointed that, as I was going to actually be IN the balloon, I wouldn’t be able to have any photos with me in it. I was actually very briefly pissed that I wouldn’t have the chance to pose on some balcony somewhere while the balloons were floating up around me.

Thankfully I managed to get over myself and finally decided to stop being so damn pretentious and stupid and to just enjoy the moment.

And dear readers, what a moment it was.

Before I knew it I was climbing the basket and the pilots were blowing up the hot air balloon. We started ascending minutes later and if I had the time to think about what I was actually doing I probably would have been more scared. But as it was, all I could do was marvel at the view. I was too busy soaking in the wondrous feeling of being up in the sky, with the wind against my face, while I take in something that no camera would ever be able to capture.

The lesson here, guys, is that in this day and age where our self-esteem is directly proportional to the number of likes we receive on Facebook, its important to remind ourselves of the reasons why we travel.

We travel to learn about different cultures, to experience the way other people live, and appreciate the fact that despite our differences we are all the same. We travel to fall in love with the people we meet and the places we see, and we travel to have fun.

But most of all, we travel for the moments that take our breath away.

2 thoughts on “The Moments That Take Your Breath Away”