Maybe he didn’t write her poems or serenade her with songs or came home with expensive gifts. But no other boy had gone the wrong way on a train for hours every day just because he liked sitting next to her while she spoke.

People said Ove saw the world in black and white but she was color. All the colour he had.

Loving someone is like moving into a house. At first you fall in love with all the new things, amazed every morning that all this belongs to you…then over the years the walls become weathered, the wood splinters here and there, and you start to love the house not so much because of all its perfection, but rather its imperfections. 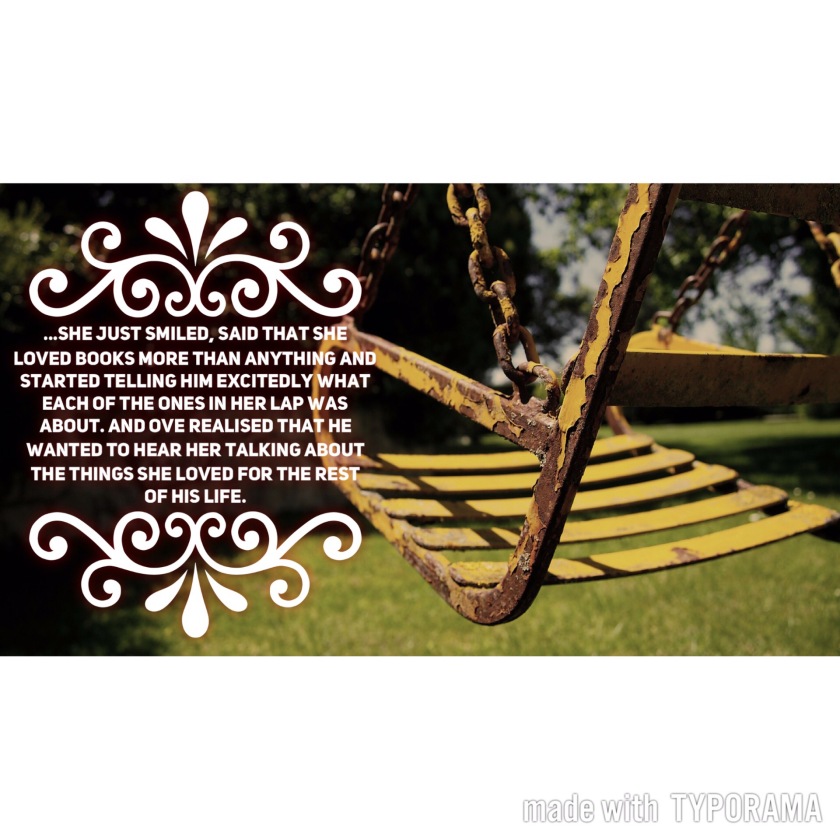 Ove and Being a Man

Men like Ove and Rune were from a generation in which one was what one did, not what one talked about.

They say the best men are born out of their faults and that they improve later on, more than if they’d never done anything wrong.

Ove and Making Time for the Things That Matter

…all people at root are time optimists. We always think there’s enough time to do things with other people. Time to say things to them. And then something happens and then we stand there holding on to words like ‘if’.

Death is a strange thing…we fear it, yet most of us fear more than anything that it may take away someone other than ourselves. For the greatest fear of death is always that it will pass us by. And leave us there alone.

She always said all roads lead to something you were predestined to do. And for her perhaps it was something, but for Ove, it was someone.

He went through life with his hands firmly shoved into his pockets. She danced.

One of the most painful moments in a person’s life probably comes with the insight that an age has been reached when there is more to look back on than ahead. And when time no longer lies ahead of one, other things have to be lived for. Memories, perhaps.

And just as a bonus, because this is also one of my favourite things in the world…

Of all the imaginable things he misses most about her, the thing he really wishes he could do again was hold her hand in his.

Sigh. You will fall in love with this book. Buy it now! 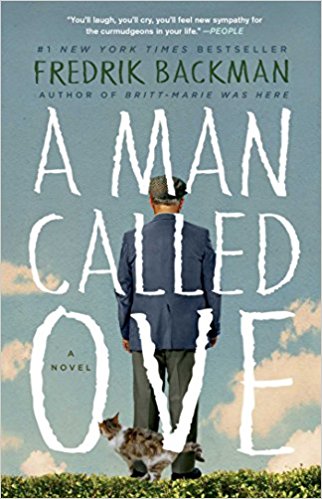 In 2009, Disney Pixar’s ‘Up‘ was nominated for a Best Picture Academy Award. Before this film, there had only been one other animated feature nominated in this category (Beauty and The Beast). I was one of the millions and millions of people who watched this film, and I still hold the opinion that that Best Picture nod owes itself to the first 5 minutes of the movie, the most gut-wrenching, heart-stabbing, tear-inducing 5 minutes I’ve ever experienced while watching a cartoon.

A Man Called Ove will draw the inevitable comparison to Up because they have pretty similar themes and messages. For example, both will make you think about the things that we lost in the name of progress.

You see, I think that while the world has gone forward in leaps and bounds in many respects, we’ve also lost some of the essence of what it means to really value our relationships with other people.

We see other people as dispensable: if we lose one friend there’s always another follower on social media to ease the sting; not happy with the guy you’re currently dating, well, moving on to the next guy is as easy as swiping right with your index finger.

Reading this book gave me all sorts of feels. I mean, let’s start with the fact that it was exceptionally written. It was funny in a way that didn’t take away from the importance of the message it was trying to impart; it was emotional without being heavy-handed; the darker undertones were well-balanced with the lighter moments. Like a metaphor for life, it had its ups and downs, good times and bad times, the tragedy of loss offset by the many small moments that make life worth living. I absolutely loved every single minute of it.

Ove is a throwback to the days where, if something’s broken, you fix it rather than replacing it. He’s simple, straightforward and rule-abiding. He thinks that there should be a place for everything and everything in its place. He doesn’t talk much but he makes sure that when he does that it makes an impact. People think that Ove is bitter and taciturn, but he is one of the most caring and endearing characters that I’ve ever read about in my life.

Above all, Ove is loyal. He is loyal to the people who has somehow wormed their way into his life even as he tried to drive them away. He is loyal to his friends even when he’s feuding heavily with them. He’s loyal to stray cats even as they muck up his daily routines. Most of all, he is loyal to the love of his life, the one person that he would walk through hell for: his wife, Sonja.

This book is about a lot of things: friendship, finding your place in the world and finding a reason to live again. But at the heart of it, its about the love that one person is capable of feeling for another. I stumbled upon this book at a time when I needed a reminder of the kind of love that is worth waiting for.

Romantic for me is what Ove had with Sonja: constancy, stability, the kind of love where one would spend hours on a train going in the wrong direction just so he can listen to a girl talk about her favourite books.

Romantic is being there when their noses are runny with the flu; its being there to hold their hand and hug them through the failures and popping open the champagne through the triumphs. Its just about being there, really.

I didn’t expect a love story when I started this book, but in a nutshell that’s what this is: a love story of Ove and the people whose lives he has touched. Thank you, Frederick Backman, for this amazing book. I love it so much that I’m making another blog post about it. Click on the tag Ove to check out the other life lessons I learned from this gem of a book.

5 out of 5 stars! Get the book from Amazon by clicking on the image below.