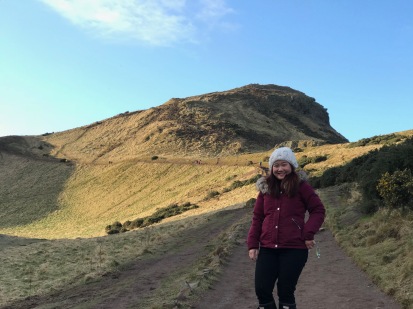 “I’m on my way from misery to happiness today…”

Finally, the last part of my Scotland blogs. Finding the time to write this blog was even more difficult than hiking up to Arthur’s Seat itself and I needed time because I really wanted to be able to do justice to one of the best experiences of my life (despite the unflattering photos and continuous whinging that you’ll all soon find in this blog).

The very first time I heard of Arthur’s Seat, my imagination was immediately captured. Despite the fact that I knew Camelot was just a legend, there was a small and unreasonable part of me that believed I’d find Excalibur on top of those hills.

I was all fired up to make this hike. I was so excited that it was all I could talk about during the long weekend. It was to be the grand finale of our Edinburgh weekend, not by design but because the weather was truly rubbish up until our last day, when the sun decided to come out and play.

TIP NUMBER ONE: Do not do this hike in questionable weather conditions. Seriously.

This hike is quite a popular one and we asked several of our acquaintances about their own experience just to give us an idea of what to expect and what to prepare for. It’s easy, they said. Kids can do it, they said. Literally a walk in the park.

TIP NUMBER TWO: Do not listen to your acquaintances. Do your own research.

It was not a bloody walk in the park by any stretch of the imagination. Climbing up Arthur’s seat is a proper hike. Had we known this, we would have been more prepared. I was wearing Hunter boots, for crying out loud. Those things were made for the rain, not for a rocky terrain. I was pretty much petrified the whole time that the rocks would somehow tear through the rubber and I’d have to make the long trek home on bare feet.

Which leads me to….

I’m not much of a hiker but I’m pretty sure shoes with traction are a requirement if you’re climbing up hills and crags. There were also areas in which the ascent was slippery as hell. Do not even get me started on the descent. 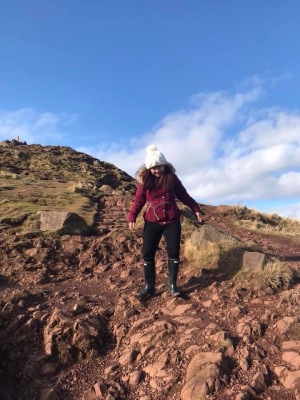 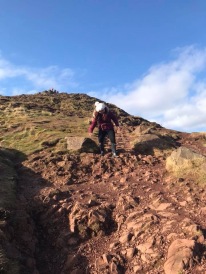 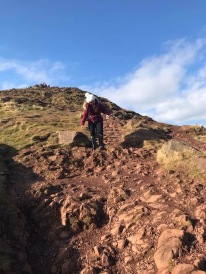 Because we were rendered complacent by the seemingly expert advise of our numerous acquaintances, we chose to walk from our flat in the city centre to Arthur’s seat. As a direct result of this monumentally stupid idea, we ended up walking for FOUR HOURS.

It took us nearly an hour to get to the base of Holyrood Park (where the peak was), two hours to climb up and down the peak and, because we got lost, another hour to get back to the city centre.

We had no food, and even more appalling, we had no water. We were incredibly unprepared for this hike, its a wonder we didn’t pass out.

Anyway, if you ignore the fact that you’re huffing and puffing and that you’ve been walking for the better part of two hours and you still can’t see the bloody peak, the views were pretty incredible. It was hard to believe we were still within the city of Edinburgh.

Being there truly felt like being transported back to a time and place when things were much simpler. Maybe that’s why city dwellers like me need to get out every now and then: take in a  little bit of nature, remind ourselves of how we are just a tiny speck in a very big world and this is why we shouldn’t take ourselves too seriously.

TIP NUMBER FIVE: Take time to breathe, ruminate and get a little perspective. There’s no better place for it than when you’re out in nature.

And then of course you get closer to the peak itself and you are reminded by how much of a millennial you are because despite the fact that some of those paths really were treacherously difficult, you still find the time to whip out your phone so that you can have a photo to post on Instagram. Oh well.

I don’t know whether it was because of the bad weather on the previous days but going up the peak was a little bit too slippery for my peace of mind. I had to use my hands and my feet to make sure I don’t get an injury. My mind was already conjuring up visions of me asking my favourite surgeon to fix my broken ankle. Shudder.

TIP NUMBER SIX: Do not think of broken ankles while making a difficult climb. FOCUS, YOU IDIOT.

The last few levels (for lack of a better word) before the peak itself were among the hardest bit you have to get through. I very nearly convinced myself that I was content with having made it that far, I didn’t really need to climb that last hurdle.

But then I thought about how I’ve come too far to chicken out at the last minute.

Plus, I think I have residual abandonment issues. I’ve always hated the thought of being left behind, of not being able to do something that everyone else was doing. Those things combined gave me enough of a push to get over my fears and just focus on climbing – excruciatingly slow, yes, but I was making it up to that peak if had to crawl on my hands and knees to do it.

And thank God I did. The views were awesome, yes, that was a given. But what I didn’t count on was the exhilaration that came with finishing a hike; I felt a huge sense of achievement even though I knew this was probably nothing compared to other trails elsewhere in the world. The important thing is that I did it, despite being genuinely scared at times. I am pretty sure there’s a metaphor for life in there somewhere.

TIP NUMBER SEVEN: Everything you’ve ever wanted is on the other side of fear – George Addair 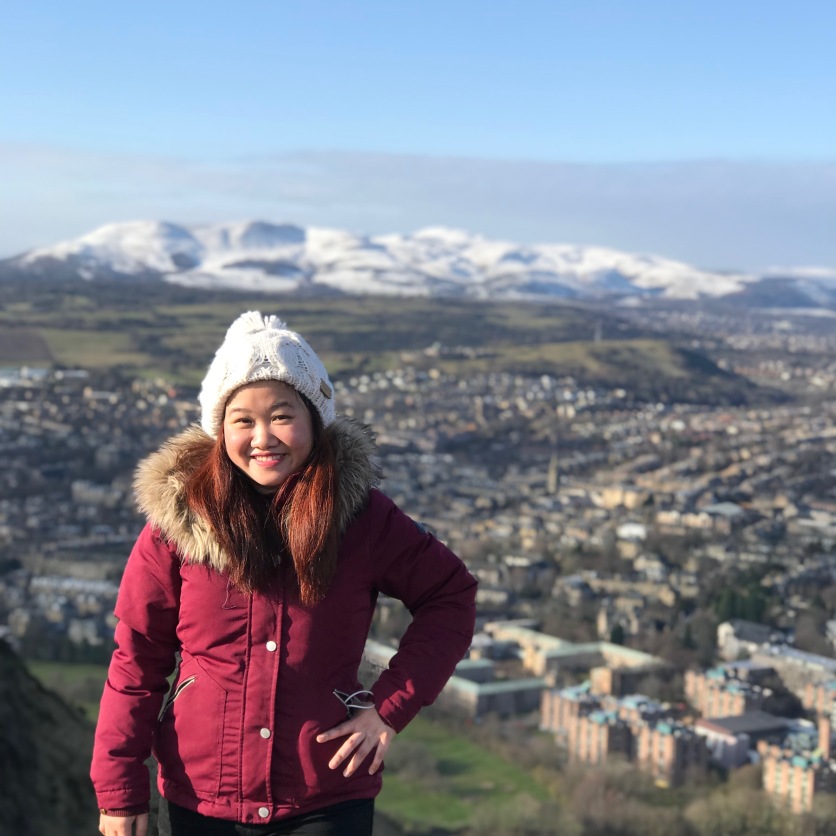 Okay so I didn’t find Excalibur on Arthur’s Seat. But I returned to London feeling recharged and ready to take on the world. I had memories of an incredible weekend and I felt even more motivated to do as many hikes as I can, see more of the world outside of the concrete jungles I usually visit when I travel.

There’s a reason why we spend so much money travelling. At the end of the day, what it all comes down to is that the world truly is such a beautiful place. There are so many places you can go, so many things to see, and you’re lucky if you get the chance to see as much of it as you can. If you do get that chance, grab it with both hands.