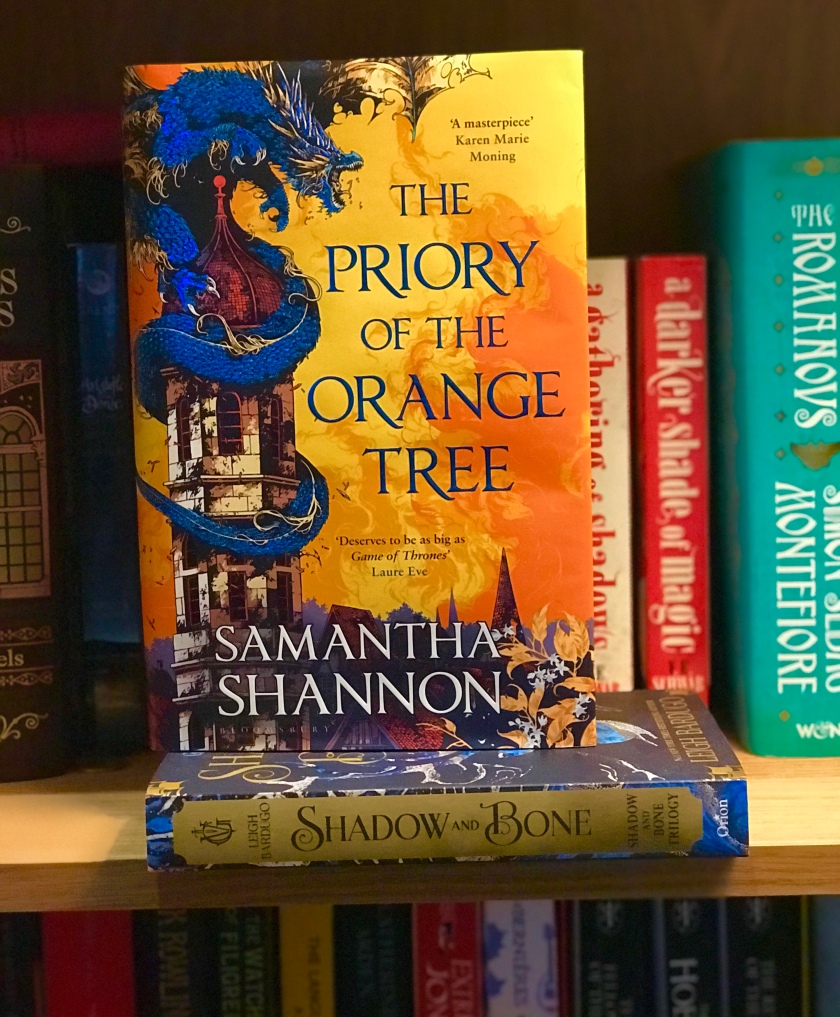 I’ve been trying to find words for the past 24 hours that will do this book justice and so far all I have to show for it are drafts that I’ve since decided were rubbish. Sometimes when a book comes out that is so ambitious in its scope, and just so damn interesting, words fail me.

Book like these are an experience. So much patience and skill went into the world-building, which we all know is the foundation of any good fantasy story. The Queendom of Inys, the mysterious Priory and the distant East all felt like real places, places that I would pay big bucks to visit I might add. Each separate location had its own language, religion, traditions and culture. Its a world that felt like it sprung fully-formed from the depths of the author’s imagination. She made it feel so easy and effortless, when it must have taken ages to piece all of it together.

The characters were as alive as the setting. First of all, I like that the members of the female population featured more prominently in this book than their male counterparts. I can see why its being called a feminist book. Its led by three strong women, each with their own distinct personalities, quirks, strengths and faults. One is a queen whose destiny is irrevocably tied to the fate of her country, another is a mage in hiding who’s been tasked to protect a queen. And the third? The third just wants to ride dragons.

Did i fail to mention there were dragons in this story?

They were such glorious, magnificent creatures in this book. You can tell how much enthusiasm Samantha Shannon had in writing them into the narrative, they totally stole each scene they were in. I loved how they were almost human in their portrayal, if that makes sense. Not only were they sentient beings they also had a a voice, a personality, and a sense of humour.

They were so involved in human lives that they even took part in war councils and contributed to political decisions. I know that having any sort of fire-breathing beings in your book will draw the inevitable comparison to Game of Thrones (intended to be a compliment I’m sure) but I think this book is a far cry from being any sort of imitation. I found it quite unique and original.

The story is rich and complex. A dynasty that was built on a lie is threatened by the arrival of an ancient enemy. Add to the mix some political machinations and betrayal, the formation and dissolution of alliances, and above all, the quest for the truth in order to keep a Queendom safe and what you have is a tale of epic proportions.

Despite the fantastical and magical elements though, this is a story that’s (strangely) very much grounded in reality. I certainly saw parallels with the current state of the world. Whether or not it was her intention, there were moments when the book felt like a social commentary on the times.

Finally, let me just say that its very rare to find a book that represents diversity in such an unobtrusive and casual way. For example, Samantha Shannon didn’t make a big fuss about the fact that several of her main characters have fluid sexual orientations, she simply made it the new normal. I think this book is a great testament to how evolved literature has become, and I’m glad that we’re at that stage where not only is everyone free to be who they are (and to love who they love), we’re also free to read and write all about it.

Don’t be put off by the weight of this book. Yes it felt like I could pound a nail through a two-by-four with it, and I gained biceps definition in the time it took me to walk home from the bookstore just by carrying it around. Its a hefty tome, but its worth it. Samantha Shannon has become one of the authors whose future works I will watch out for. The next time she publishes something, I’m going to hie myself off to my nearest Waterstones faster than you can say ‘Dracarys!’.