Sometimes, you come across a book series that defies categories and genres, and is such a mishmash of storylines and plots, that you find yourself scratching your head and asking: WHAT THE HELL AM I READING?!

This is exactly the kind of reaction this book series evoked in me. There are four books in this series, and usually I expect to be confused and muddled for the first two books when the author is laying all the groundwork for the reveals, plot twists and payoffs that are sure to occur in the last book. HOWEVER. When you’re already reading the last book and you’re still not quite sure what it is you’re reading and what the point of the story is, I think that’s a different story altogether.

Every year on St Mark’s Eve, Blue Sargent stands guard with her psychic mum as a group of soon-to-be dead people walk along the “corpse road”. She herself has never seen them until this year, when one of them sees and speaks directly to her. Her clairvoyant aunt told her that there is only one reason for the dead to speak directly to a non-seer: either Blue is this person’s true love or she killed him herself. Now this is relevant because all her life, Blue has been told that if she kisses her true love, he will die (how tragic!). She doesn’t know who this guy is, all she has is a whisper of a name: Gansey.

Gansey (Richard Campbell Gansey III, to be more exact) is no stranger to dying. In fact, he’d already died once before after being stung by a hornet and he was brought back to life by the power of the “ley line”, which I imagine to be some kind of psychic force field. As he laid there dying, a voice whispered in his ear that he will be brought back to life because at that very same moment, someone else died on the ley line when they weren’t supposed to. This second shot at life led to an obsession over all things related to the ley line, specifically the quest to find ‘The Raven King”, whom legend supposes to be buried in the heart of this line. Legend also has it that whoever finds this tomb will be granted one favour by The Raven King.

Through a series of chance and twists of fate, Blue finds herself increasingly involved with Gansey and the rest of the Raven Boys: Adam, the poor scholar who struggles with jealousy, pride and the need to make it in the world in his own terms and without receiving any hand-outs from his rich friends; Ronan, a troubled kid who found his father bludgeoned to death and who plays a more central role to this story than I initially thought; and Noah, who’s just…always there…until he isn’t. In this already complicated mix of characters we add Blue’s family: her psychic Mom and her psychic friends who all live in 300 Fox Way.

I’m telling you, there are a lot of things that go down in this series. There’s the mysterious power of dreams; a subplot that to me is a metaphoric plea to save the environment; demonic activity; death and resurrection; romance. It is FULL ON. In the hands of any other author, I think this book would have been rubbish. However, Maggie’s prose is so extremely readable that I found myself just going along with it no matter how confused I became. I’ve taken some memorable quotes from Pinterest and included them in this blog post (all credits to the original users who posted them, none of these are mine!). 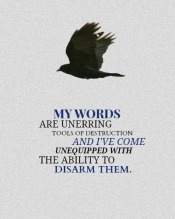 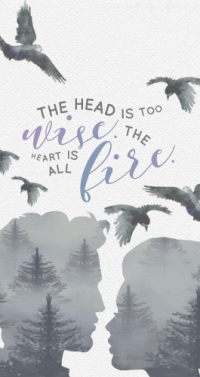 I enjoyed the story and I enjoyed the character developments. I enjoyed reading the strength of the friendship among the four Raven Boys, the kind that won’t let you go into the dark alone, and the kind that will save you even if what you need saving from is yourself. I loved that Blue is a sensible heroine and that I didn’t feel the need to smack her, and I love that the romance developed gradually and didn’t feel forced or rushed in any way. I also loved that the romance aspect never overshadowed the supernatural element of the story. There was also a surprising twist -and additional romantic entanglement – that I would not have seen coming but was unfortunately spoiled for me because I read the bloody Goodreads reviews (%#£!!!!) but which I think readers will enjoy.

Does Gansey die? Is he Blue’s true love? Will she ever get to kiss anyone? Does this ragtag group of misfits ever find The Raven King? All those questions will be answered after a lot of talking and reading and posturing. I warn readers that I am of the opinion that I finished this series only out of sheer curiosity and stubbornness, and that some readers may find it tedious and pointless (adjectives that I used at some point while reading the books). Nevertheless, YA fans may still want to check it out. I also just have to point out that the cover art is incredibly beautiful.

If you agree or disagree with the review, feel free to leave comments below. I would love to know what everyone else thought about this series!