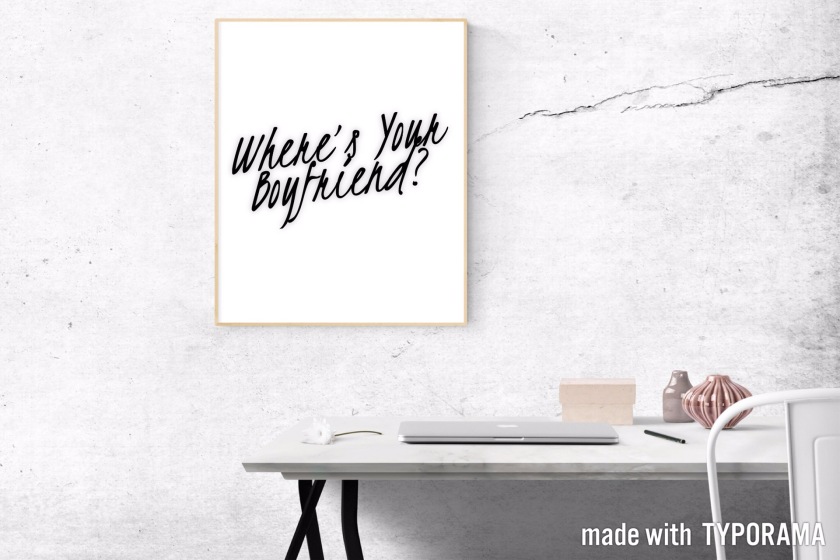 Every time I come for a visit to the Philippines – and especially as I reach that age where everyone you know is either a wife or a mother – there’s just that little bit of anxiety and a touch of resentment mixed in with the all the excitement.

You see, I come from a culture where its more or less expected, nay, required for a woman to be either in a serious relationship if not married by the age of 25. For a long long time I bought into the whole Stepford wife illusion of white picket fences, loving husband and 2.5 babies. That to me was THE goal.

I’ve said this before and I’ll say it again, moving to London saved my life.

I once volunteered to help less fortunate children to read and one of the books we read was The Giving Tree. I must have been 27 at the time and I remember trying my best to keep it together and to keep my emotions in check so that I wouldn’t blubber like a nutter in front of all those kids who had so much more to worry about than my love life.

I was in a very self-destructive, unhealthy and pathetically one-sided relationship in college that gave new meaning to the word friend zone. I lost myself completely in my misguided quest to make another person love me. I was stupid enough to believe, just like that bloody giving tree, that if you give of yourself enough that other person will love you back.

It took me about 8 years to realise that love doesn’t work that way. You shouldn’t have to work so hard to make someone else love you. You don’t need to lose yourself in a relationship. Even as you become partners in all things, its still healthy to retain that sense of individuality, and the sense of who you are as a person outside of the relationship. In short, to be able to truly give yourself to someone, you have to be whole, and you have to know and love yourself first.

This was not an easy lesson for me to learn and in a way, I’m probably still in the process of learning it. Its hard for me not to be a giver (I probably always will be) and it was so hard for me to gain back my self-esteem and my self-respect.

That’s one of the main reasons why I’ve remained single for a long long time. I date, sure, but at the back of my mind I know that my head wasn’t in the right place for me to even think about starting anything serious. I had so much to discover about myself, so much lost time to make up for, so many things that I still need to do and a boyfriend would just get in the way.

I’ve probably been a bit self-absorbed for the last 6 years or so – about the length of time that I’ve lived and worked in London. It was all about what I want to do, what I need to learn, where I need to go. I enjoyed the freedom of having no one to think about apart from myself. If I make mistakes no one else needs to suffer from it.

And to be honest that was probably a good thing. My experimental forays into trying things that are outside my comfort zone have gained me new skills, new friends and new experiences that cannot be bought by any kind of money. I have a job I love even as it often gives me stress, a side job that pays me to do one of the things I enjoy most, a blog that keeps me sane, a comfortable flat, and the kind of life that if I really think about it, brings me happiness. I’m one application (and 2 thousand pounds) away from being British. I’m so damn proud of all my achievements and I’ve never had any reason to doubt myself and my life choices. Until I come home to the Philippines of course.

Look, I date okay. Not that I need to explain myself to anyone, but I do in fact go on several dates a year. The quality of those dates are sometimes suspect and none of them have panned out yet, but I’ve yet to lose hope that I’ll meet that someone and I’ll just know it was worth waiting and holding out for something more meaningful than a one-night stand.

I know, I know, I turned 30 and I’m losing fertile eggs as we speak. But seriously, the notion that being a wife or a mother is the measure of how successful a woman is is really outdated. I came home this year and people start to look at me funny because I don’t have a man by my side or an infant in my arms. No one wants to hear about every thing else I’ve done or what I have achieved, they just want to look at my finger to see if anyone’s put a ring on it.

I admit, I had my moment of panic when I turned 30. For maybe a day. And then I gave myself a kick in the arse and reminded myself that first of all, its not a race to the finish and second of all, 30 isn’t exactly ancient. I’ve had dates that never would have taken me as seriously at 27 as they do now. My life isn’t over, its not quite time for me to think about adopting cats yet.

The Measure of Success

It drives me mad to think that there are people who think I’m somehow less just because I’m “still” single. I have all the admiration in the world for mothers and for women who have chosen to start a family even at the expense of having a career – I think those women should be celebrated (sainted, really). But equally, credit should be given to those women who chose the other fork in the road and have fought to build a career despite the challenges and yes, despite being alone for most of it.

And its not like motherhood is not part of the plan. I, for one, would like to see my genes propagated (is that the right word?), but I’m not sitting around twiddling my thumbs while waiting for the future Mr. Angela. Its part of my bigger plan, its not my only plan. So yes, I do want to get married eventually and this is the first time that I can honestly say I’m ready for it (cue Taylor Swift music) so the answer to that question is a “not yet” rather than a hard “no”.

I hate having to defend my life choices to other people, I promised myself that I would rise above the weight of society’s expectations (I absolutely knew this was coming). It sickens me to think that I can still be affected by other people’s small minds and narrow world-views. I sometimes want to scream in frustration that there is a world out there bigger than the very small circle in which your lives revolve, but I don’t want to seem like I’m belittling anyone’s life or the choices they have made. I just wish they’d exercise the same caution when they choose to judge mine.

I don’t know. I don’t know where my boyfriend is. Twice in the past 6 years I thought I’ve found him but it turned out I haven’t. I haven’t met him yet, but I can feel myself getting closer. I’m enjoying the roundabout journey I’m taking to find him. It might take me a little longer, but when I meet him he can be sure that I’m whole, I’m ready, and I’m excited to share my passions, my dreams, and my life with him and to have him share his with me in turn.

Like I said, there’s a great big world out there for me to see. Life is one very exciting adventure and it would sure be grand to be holding someone’s hand as I live through it.

So for all you women out there who get asked the same questions from well-meaning and sometimes not so well-meaning friends and family: DO NOT GIVE IN. DO NOT SETTLE. And absolutely DO NOT let it be a factor in your decisions. You will come to it in your own damn time, and in your own way. Be strong.

One thought on “Where’s Your Boyfriend?”