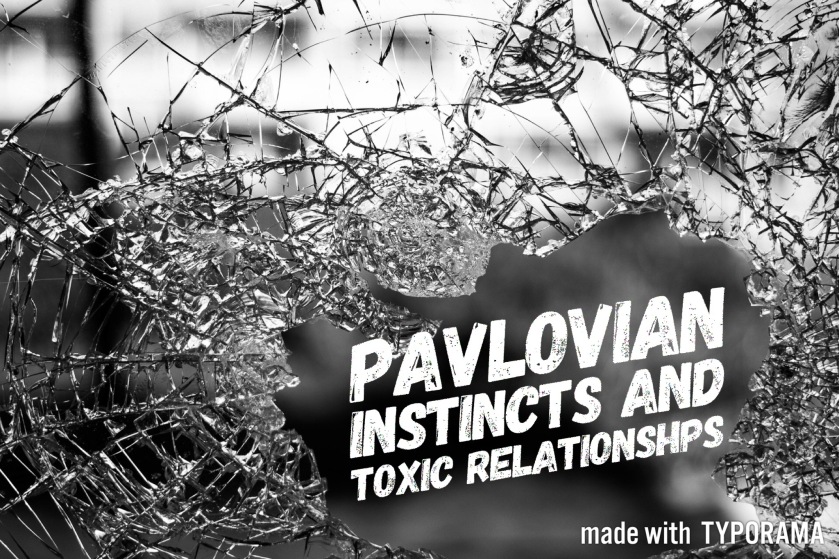 Its been more than a decade since I took Psychology 101 in college but one of the first things I remember reading was about Ivan Pavlov’s experiments with a dog, a bell and a piece of meat.

As the story goes, Mr. Pavlov would simultaneously offer the dog a piece of meat every time he rings the bell, conditioning  the dog to associate the ringing of the bell with the appearance of food. He repeated this several times until it got to the point where the dog would salivate every time the bell was rung, with or without the meat.

I’d like to think that as human beings we’d have far more control over our impulses and actions than the dog in this story. But the Pavlovian technique is famous for a reason, because it is more or less an accurate reflection of human behaviour – or at least it IS in some cases.

I think of myself as a reasonably intelligent woman. I’m strong-willed, independent and capable of making it on my own, with or without a man. In fact, I’ve been told quite recently that I am the perfect example of an alpha female. Of course that person also said I have the tendency to be so bossy as to be completely intimidating, but hey, I’ll take that as a compliment.

However, the sad truth is that – just like everyone else – I have my own weaknesses. One in particular stands out as my kryptonite, my achilles heel, my very own Ivan Pavlov with that damned infernal bell.

You see, he rings that bell and I am conditioned to come running. He then tells me to jump and I’ll simply ask ‘how high?’. I’ve associated him with so many good memories and so many good feelings that even now, even after the struggles I’ve gone through to build back the broken pieces of my self-respect, all it takes is one message, one phone call and I’m right back where I started.

It’s as if the past 6 or 7 years never happened. As if I’m still that sad, lonely, overweight and broken-hearted girl whose self-esteem was so low that she had to turn to food to comfort, thus perpetuating a cycle that took the better part of the decade to break.

Why do we do this to ourselves?

The stupid thing is, the feelings that initially brought on the impulse to please don’t even exist anymore. I’ve thought about this all day and all night and I’ve come to the conclusion that I don’t possess even a single hope that this story will end with the two of us together. That ship has sailed a long long time ago.

So why am I bending over backwards trying to do so many things for a person who doesn’t even acknowledge or appreciate it? Who thinks he’s entitled to my time and efforts? Who takes it for granted as his due?

All I know is that I am not a dog. In fact, that is an insult to dogs. In this scenario, dogs probably possess more intelligence than I do. Their EQ is probably higher than mine is at the moment. At least they know who deserves to have and keep their loyalty.

There are so many things that I still want to say but if I say it all at once this blog is going to turn into a book. I guess I just needed to get this off my chest. I have come so far to fall back on bad habits and toxic relationships now.

I’ve learned – or at least I thought I did – that I need to cull out those relationships that do nothing for me. Even if that leaves me single and with only a handful of friends, its still better than tolerating something that’s bad for me just because I’m afraid to be in my own company. I happen to love me, especially the me that I am now.

I’ve worked so hard to make peace with the kind of person that I am, to get to the point where I can look at the mirror and feel pretty, and where I can look at my life and feel proud for what I’ve accomplished. This week has felt like a step, no, a huge slide backward. And all because my Ivan Pavlov rang that bell.

It stops now. Enough is enough. I am taking that bell and crushing it with the force of my will, and then I’m throwing it into a metaphorical ocean so that I will never hear it in my head ever again.

I refuse to be an example of the conditioning theory. Go to hell, Ivan Pavlov. Go to hell and leave me alone.