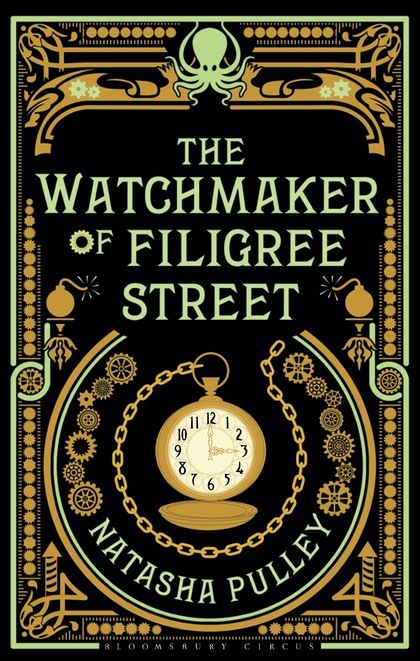 When my parents and I visited my cousin in Switzerland last year, she bought us these made-to-order truffles that came in a gorgeous gold box with a blue ribbon around it. At first it looked and tasted like your ordinary run-of-the mill chocolate, and then you kept chewing and chewing and chewing, and suddenly all sorts of flavours explode in your mouth, and its like you discover everything that’s good about the world in that one piece of chocolate truffle.

I know it sounds random, but that is the closest metaphor I could find to describe what it felt like to read this book.

First of all, I don’t know what Steampunk means, okay? As a blogger and wannabe book reviewer, I should be able to provide a definition for that genre on request but I can’t. This book apparently falls under the genre, and as far as I can tell steampunk is a general term for something that’s set in the Victorian era but contains futuristic (and even fantastical) elements.

I suppose it doesn’t really matter if I don’t know what steampunk means, because I have never read any novel as hard to categorise and put into a box as this one. It defies genres, it defies explanations, and, at different times while reading it, I thought it defined all common sense in the best way possible.

At first glance, one could be forgiven for thinking that this is a simple story about a clerk who works for the Home Office in Whitehall during the Victorian era who was  saved by – of all things – a pocket watch from becoming a victim of a terrible bombing. He traces the origins of this watch back to a mysterious and enigmatic watchmaker on Filigree street, and from there, all sorts of mayhem ensues.

I didn’t quite know what to make of this book at first. By the time I thought to wonder what the hell I was reading, I was already halfway through the book. And that is a testament to the author’s talent as a writer. She can make even the most mundane of things seem interesting.

And let me tell you, its very easy to judge this book as – as one reviewer on Goodreads so eloquently put it – a one-way ticket to Snoozeville. Those looking for heart-stopping action or a fully-formed plot would find it difficult to get through this book. On the surface, nothing really seems to be happening. Or at least, nothing important anyway.

I think this is one of those books that is more character-driven than plot-driven. The strength of the book lies not in its narrative but rather in the developing relationships between the characters, particularly that of Thaniel (said clerk) and Keita Mori (watchmaker).

There was a very clear chemistry between these two men, a kind of alchemical attraction that is evident in every interaction, even when they’re just sitting around sipping green tea. Their conversations were rapid fire and rife with secret glances and inside jokes; it felt like we, as readers, were being treated to a glimpse of something so unbearably intimate.

It was all so very subtly done that I didn’t even realise I was actually reading a love story until I REALISED I WAS READING A LOVE STORY.

Confession Time: I reread this book last night because it was one of those books that I sort of whizzed through because I was just so impatient to get to the ending. I was never really quite sure that I wasn’t just losing my mind and literally reading too much into things, such that I was seeing and feeling sexual tension where there was none.

But nope. No two ways about it, this book is a bloody romance novel, albeit a really subtle and well-crafted one.

Finding the romance amidst everything that was going on plot-wise was like, I don’t know, that first bite of chocolate truffle, or as Katy Perry once wrote in one of her songs, like eating hard candy with a surprise centre. I didn’t expect it, and it somehow felt more magical to find it because it was so unexpected (kind of like love itself, I suppose).

And the romance was just one of the many pleasant surprises in this book. There were endearing touches of whimsy everywhere, especially in Keita Mori’s clockwork inventions. Everything about the house on Filigree Street feels enchanting, amazing and well ahead of its time.

In fact, my third favourite character (and Thaniel and Mori win by a very narrow margin only by virtue of the fact that they’re ACTUAL human beings) is a mischievous sock-loving clockwork octopus named Katsu.

That’s not to say that the book didn’t have its darker moments. It calls to question everything we know about time and the future, specifically our ability to predict it.

Don’t you guys find it mind-bending sometimes how one simple decision can alter our lives forever? Like how, if we decide to take the later train instead of the one we usually catch because we were running late because we decided to party on a weeknight the night before, we end up missing the chance to meet our future husband and therefore all our future children end up being unborn?

Doesn’t it freak you out sometimes how life seems to be made up of all these infinitesimal moments of chance and missed opportunities?

It sure as hell freaks me out.

Anyway, I’ve gone on and on as usual when all I really wanted to say was that you all should give this book a chance. The reviews have been hit-or-miss so far, and I suppose its all a matter of taste, but I personally would vouch for it. And also, the cover is TO DIE FOR.

Keep an open mind dear readers and fellow bookworms. Open your heart to a lonely Japanese man with a mechanical pet octopus, and you will find yourself wanting to journey to Filigree street, and just like Thaniel, want to stay there forever,